Florianopolis Brazil is a magnificent city with a blend of beach, surfing, adventure sport, and a modern city driving Brazilian innovation.

An island of the land

Florianopolis has received accolades from The New York Times, Newsweek and others ranging from marking the city as the party destination of the year to being in the top ten most dynamic cities worldwide.

I was visiting a friend in Florianopolis who I got to know while in Germany as a Rotary Youth Exchange student. His family lived on the beach-facing side of the island, so I really got to experience the beach life of Florianopolis more than anything else.

Though I am starting to feel a bit repetitive in my describing of Brazilian beaches, like that of Porto Seguro in the north of Brazil, this beach has a totally different vibe. Now that we are further away from the equator, the waters are not nearly as warm, but the waves are great, making Florianopolis one of the top surfing destinations in Brazil. The city of Florianopolis is also a rather sizable and modern city, with more modern attractions than historical sites, despite its 500-year history.

Bottom line - If you are in the south of Brazil, then you must visit Florianopolis. The city has something for every person and offers an experience very different from any other Brazilian city. If you are a surfer or avid beachgoer: welcome to paradise.

Orienting yourself around Florianopolis

Florianopolis is a large island city off the southern coast of Brazil. It is the capital of the state of Santa Catarina, where I also visited the Germanesque town of Blumenau. The 33-mile-long island is truly a land of two tales. The ocean-facing side of the island is all about the beach, whereas the land-facing side of the island is a bit more serious about the business and politics of running one of Brazil’s highest standard of living states. The city does extend into the mainland as well, where around 1 million people live in the metropolitan area.

Though the city is vibrant with nightclubs, cuisine, and many annual events, perhaps the biggest draw to Florianopolis, and the one which I will focus on in this post is the beaches.

The beaches of Florianopolis

There are a total of 42 beaches in Florianopolis. The best known are:

I was situated in the eastern (central) area of Florianópolis, so these are the beaches I can speak to best. In particular, Mole Beach and Joaquina Beach

Pro tip: The northern beaches are the most popular, and have the most activities and amenities, however, the southern stretch of the Florianopolis island is less inhabited and the beaches there will be much less crowded. If you go that way, be prepared with a picnic and anything else you might need to be comfortable for the day, as there might be fewer vendors to sell you such things. 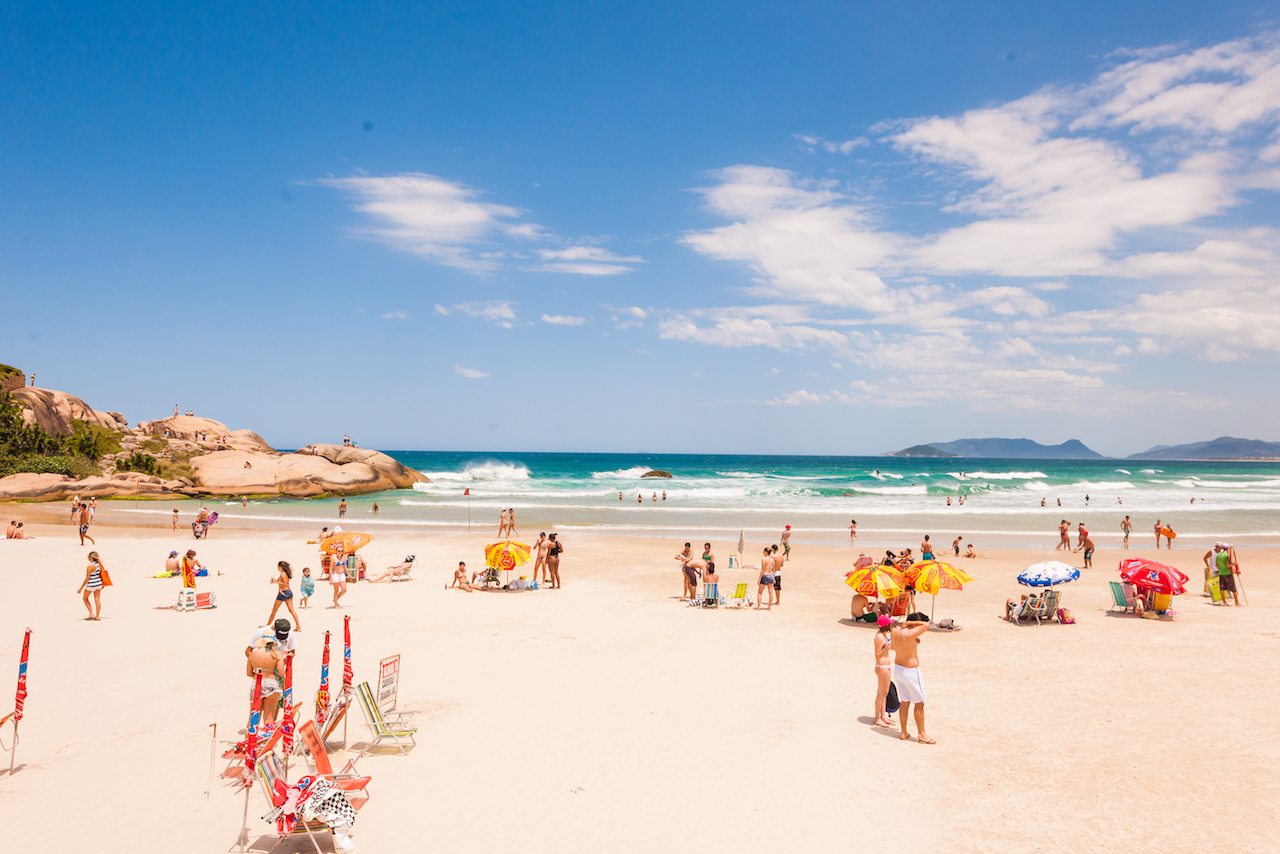 The Joaquina Beach is located on the eastern side of the Florianopolis island. This beach has the best surfing in the area, and as such, is the most popular destination for younger visitors. I cannot catch a wave to save my life, as you can see in the video posted in my guide about Porto Seguro, but I love people-watching and admiring others who can do all the water sports way better than I can.

I acquainted myself more with a beach towel and long walks during the sunrise and sunset. I can say that in the mornings, the Joaquina Beach is more or less empty. Depending on the day, the beach can get pretty full by 10:00 A.M. or noon.

All of the to-be-expected beach activities can be found at Joaquina Beach. You should note that this is one of the top surfing destinations in Brazil, and known worldwide for its reliable waves. This means that as a swimmer, you will be sharing space with surfers, so just be mindful of that. 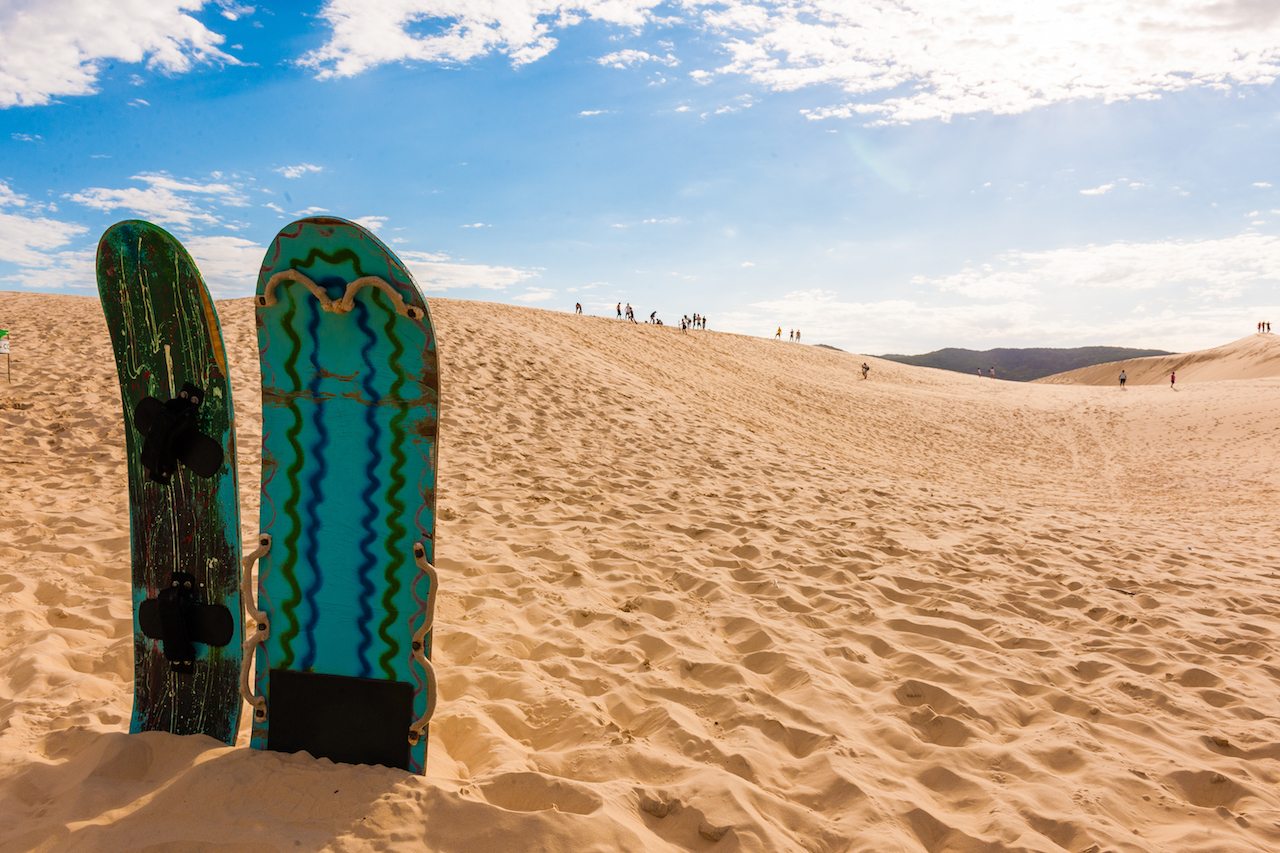 The other super cool activity at Joaquina Beach, which I did not expect to find, is sandboarding! The dunes of Joaquina Beach are really impressive and are perfect for strapping a board to your feet and letting gravity do all the work. At the time and location when I was there, there were no lifts, so you have to walk up the dunes yourself, which isn’t a bad thing due to distance, as much as it is just difficult to walk up a hill of sand.

Here is a great video I found with a short driving tour around Florianopolis, and then showing off the beaches and the sandboarding as well.

Like other eastern / central beaches Florianopolis, Mole is also all about the surfing. In fact, this beach is nearly exclusively about the surfing. The terrain here is a bit less sandy, so no sandboarding, but there are several scuba expeditions which depart from Mole. The surrounding view is really beautiful with green hills and large rock formations. I find that the aesthetic of Mole Beach is much more interesting than the more typical sandy beaches. 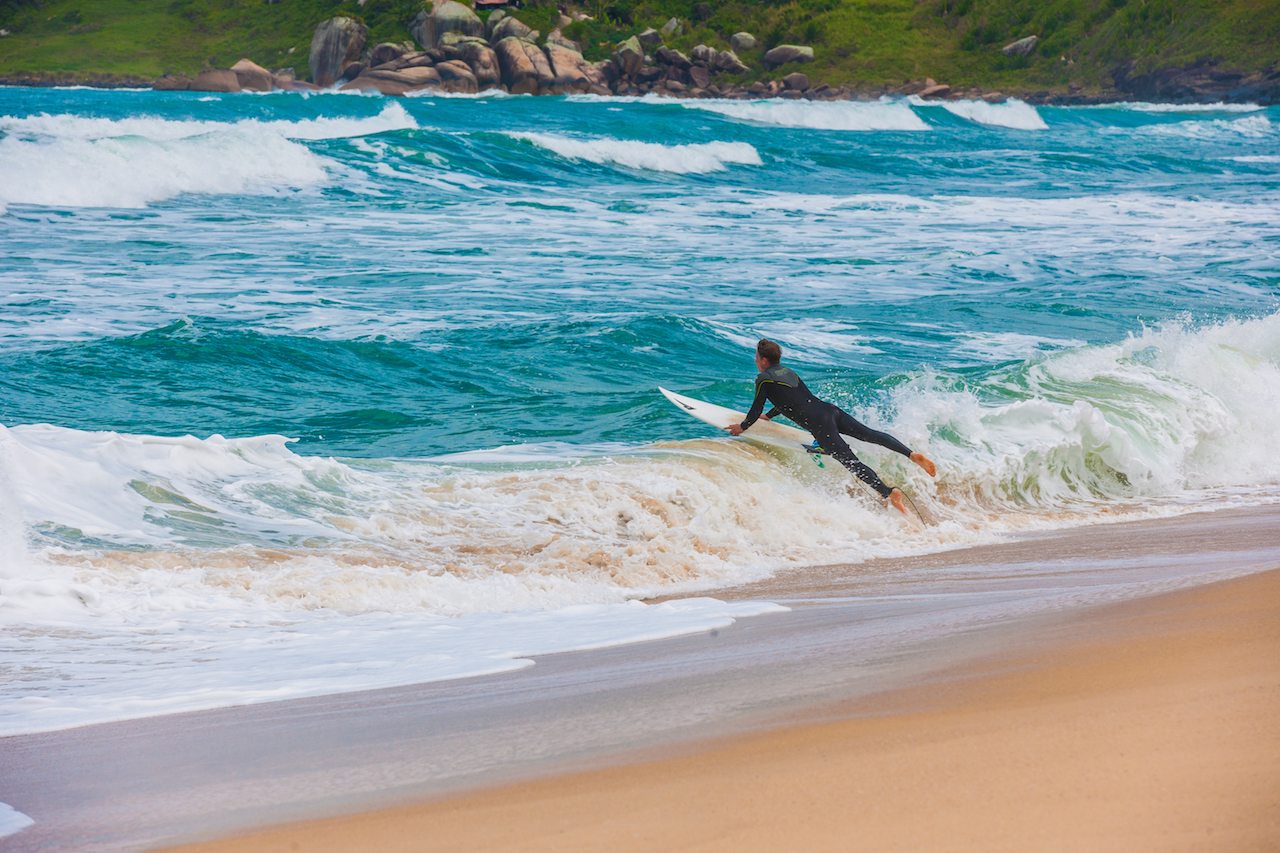 Traveling between the mainland and the beaches

I usually stick to public transportation when I travel, but this is one bus ride you might want to skip. Depending on the route, the trip from the continental side of Florianopolis to any of the island beaches can easily take more than an hour, and up to 2.5 hours. You can not avoid making transfers, and since the island and the mainland are connected by only 3 bridges (of which, the main one pictured below, is closed for renovation as of this writing), makes traffic congestion a problem.

Visiting both sides of Florianopolis is well worth it, just be aware of this. Uber now operates in Florianopolis, and for just USD$10-15 each way, you can cut down the drive time from the continental downtown to Mole Beach to about 35 minutes.

Taking all of that in mind, Florianopolis is a big place, so you might like to align your accommodations with the area that you want to focus your time in. That, or switch accommodations after a few days so that you can experience both the island side and the continental side of Florianopolis with greater ease. 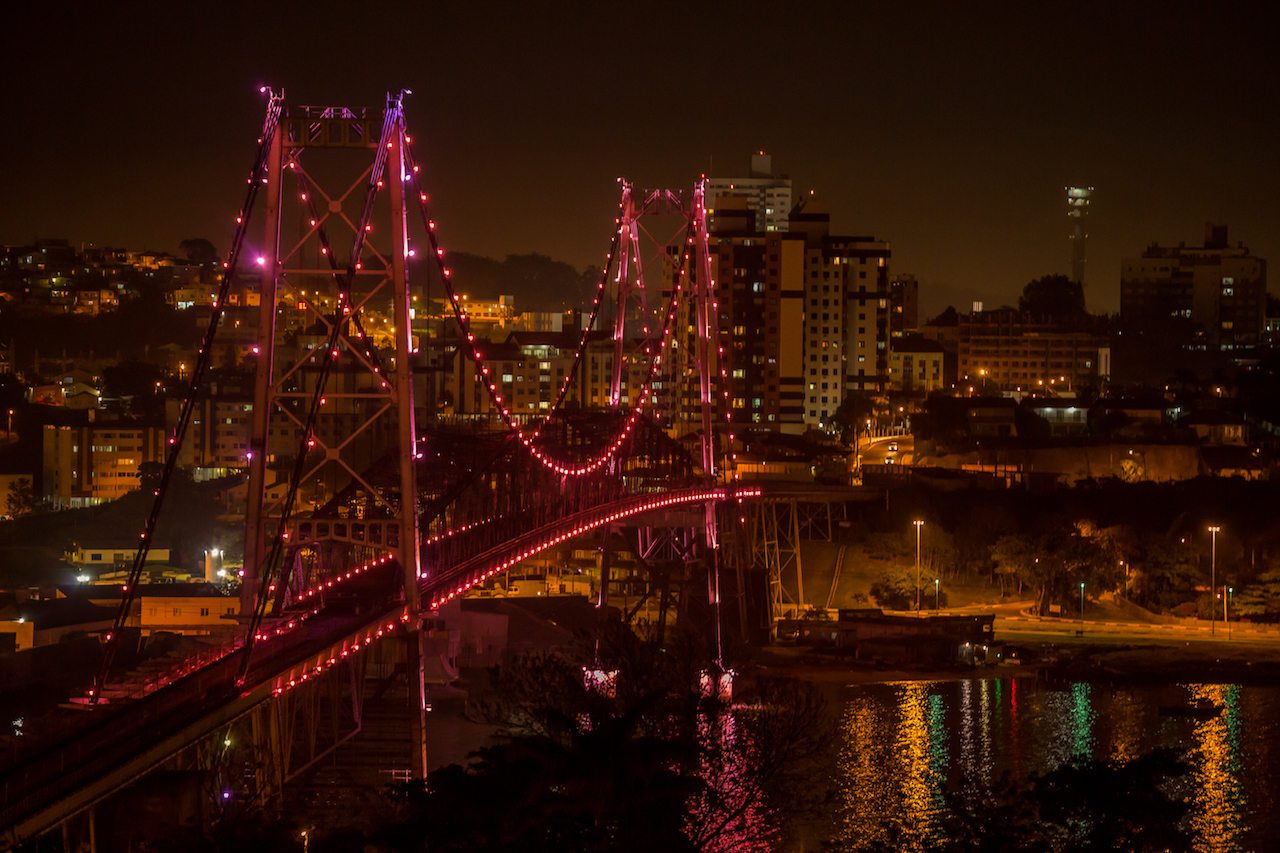 For more information about visiting Florianopolis and the state of Santa Catarina, read this additional information at VisitBrasil.com. In the meantime, I would love to hear your thoughts and learn about your experiences by leaving a comment below. Alternatively, you may also connect with me directly on Twitter at @judsonlmoore. See you soon!