How to visit the Suez Canal in a presidential yacht

Ever wonder how to visit the Suez Canal? Thanks to the Gabr Fellowship, I got to go there myself on a presidential pleasure cruise.

The Suez Canal isn’t exactly a tourist destination, but that can’t keep me from taking a leisure cruise on a presidential yacht on a beautiful day! The Suez Canal, a modern engineering marvel of staggering proportions, is a highly militarized zone in eastern Egypt, connecting the Mediterranean Sea and the Red Sea. Originally opened in 1869, the canal became the primary artery for goods to flow between east and west for over a hundred years. With so much trade traversing the canal, the capacity was deemed in need of a boost and so in 2014 work commenced which would increase the canal’s capacity from 50 transits a day to 97, and cut waiting times from 18 to 11 hours.

If you’re determined to visit the Suez Canal, there are a few ways you can do it:

In my case, I was invited by the Egyptian Government as part of an official delegation during my participation in East-West: the art of dialogue fellowship. This program was a 4-week exchange between Egypt and the United States where participants, known as Gabr Fellows (after the financing foundation’s namesake, Shafik Gabr), toured around the two countries meeting with leaders and dignitaries in education, business, politics, religion, and the military.

On this picturesque day, we were escorted by military convoy from Cairo to Ismailia, the port city in the middle of the Suez Canal where the Suez Canal Authority headquarters is located. From here, all operations of the canal are overseen and coordinated with precision. 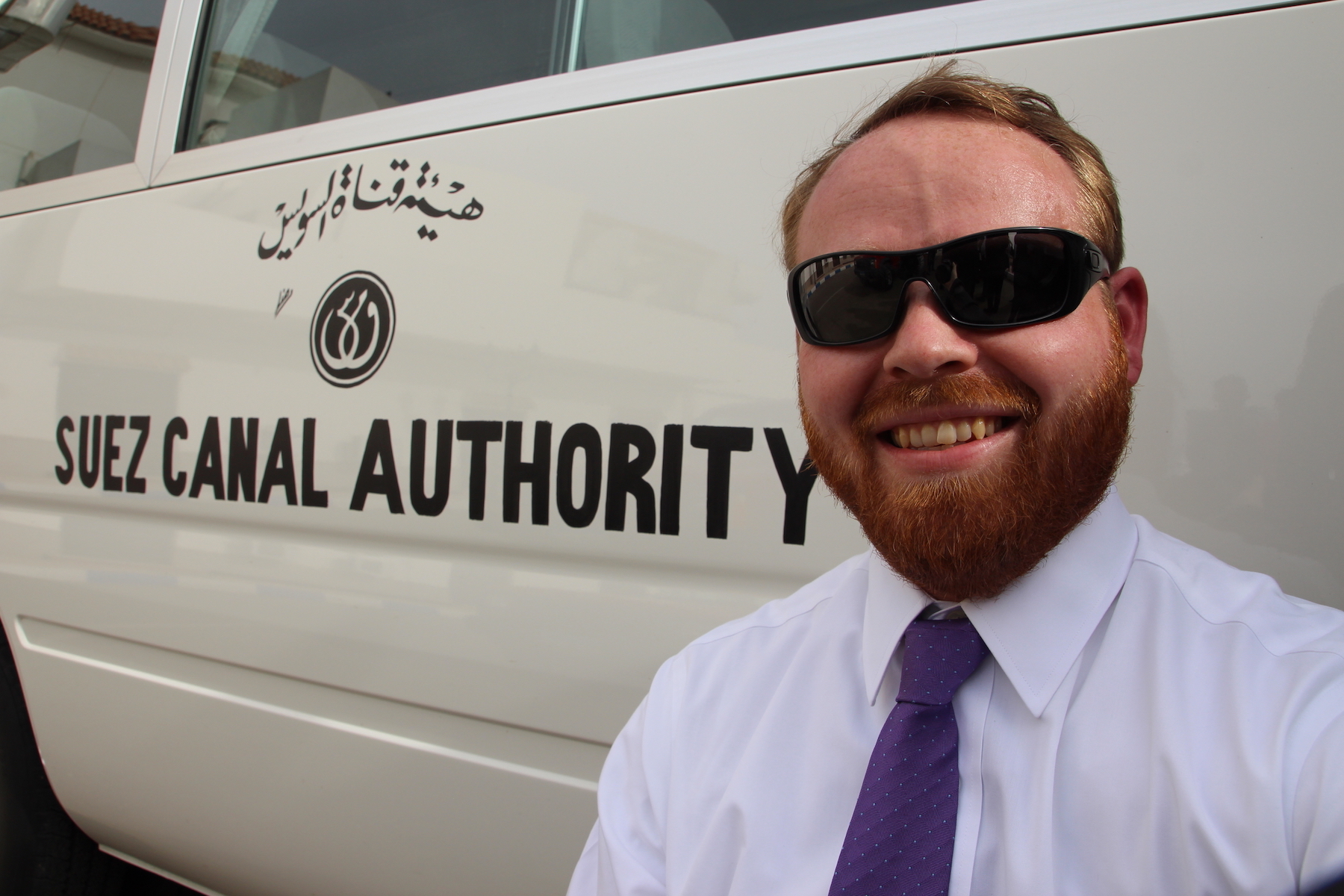 Preparing to disembark on our Suez Canal cruise

We learned that the original opening date of the Suez Canal was in 1869 and it was built by sheer manpower and the will of a people. 1,000,000 Egyptians built the canal by hand and with the best tools available at the time. 100,000 people died in the process.

In 2015, the canal underwent a major overhaul that nearly doubled its capacity. The project came at a staggering cost of $8.92B, which the Egyptian government did not have at the time.

Egypt had experienced several revolutions during recent years. In 2011 the Mubarak regime was toppled and ultimately replaced with Muslim Brotherhood leader Mohamed Morsi. This didn’t sit well with Egyptians and so in 2014, they took to the streets again. After prolonged protests, the military stepped in and General Abdel Fattah el-Sisi became interim president, and then later was elected president. He is still the president of Egypt today.

As the freshly-minted president of Egypt, Sisi needed a cause that could unite Egyptians and bring everyone together for the economic prosperity of the country. He found his cause in the expansion of the Suez Canal.

In just over 6-months (192 days, to be exact), the Egyptian people provided the full funding for the Suez Canal expansion via bonds. Egyptians view the canal’s benefit not just from its revenue potential. The canal’s expansion was also for the creation of future opportunities for economic redundancy, strengthening industry, manufacturing, and the strategic viability of the whole region. 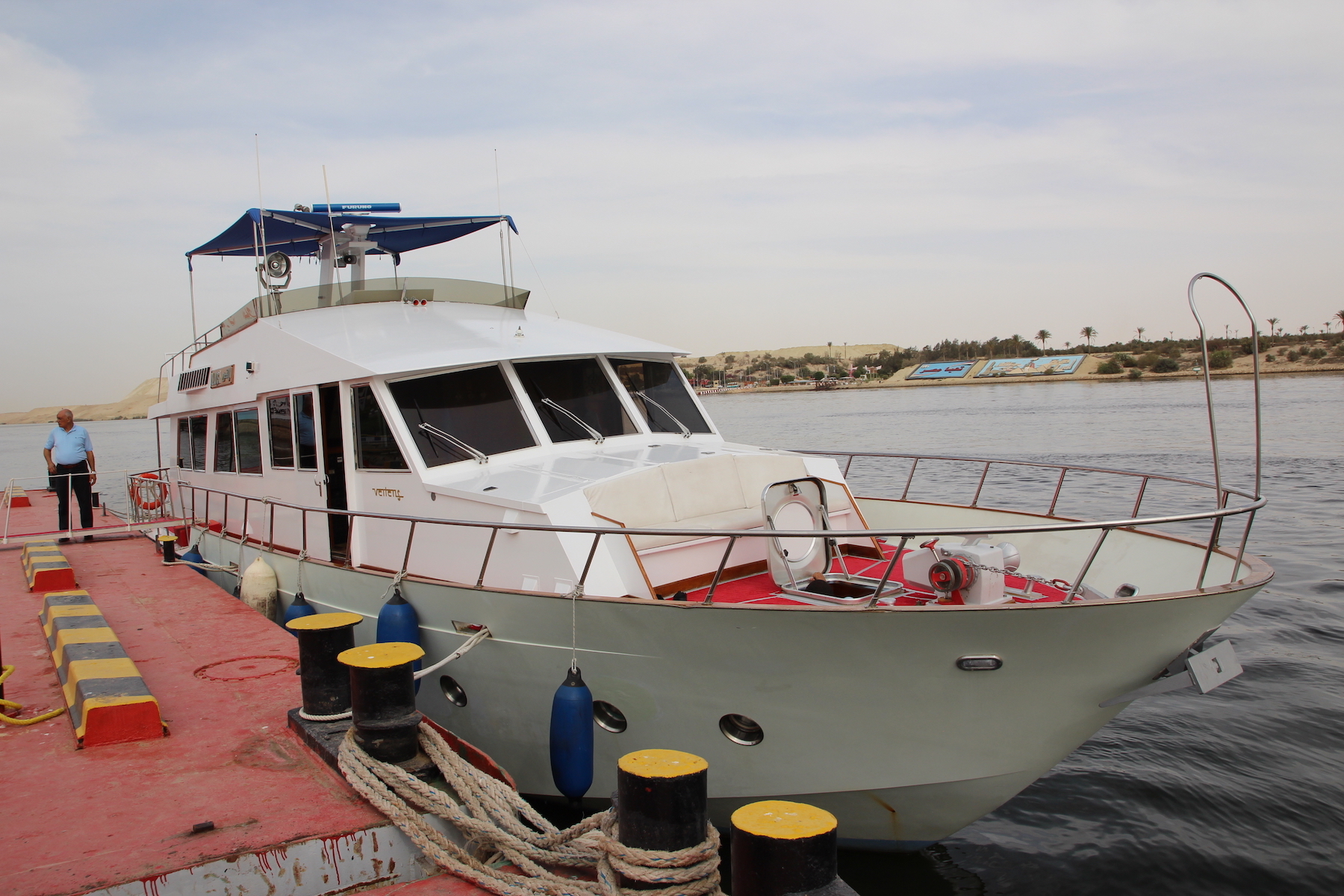 They had less time than they thought

Engineers estimated that building the new Suez Canal would take 5-years. The admiral overseeing the project was ambitious enough to say he could do it in only three years.

When President Sisi came to the Admiral’s announcement event, Sisi told the Admiral in advance that he would be making a small request, but didn’t mention what it was. Then, when the admiral announced the 3-year project, President Sisi spoke out to request it be done in an impossible 1-year!

The admiral, shocked, nodded at the president as he contemplated the challenge he was tasked with. In the end, Egypt succeeded and in exactly 1 year the New Suez Canal opened for business! 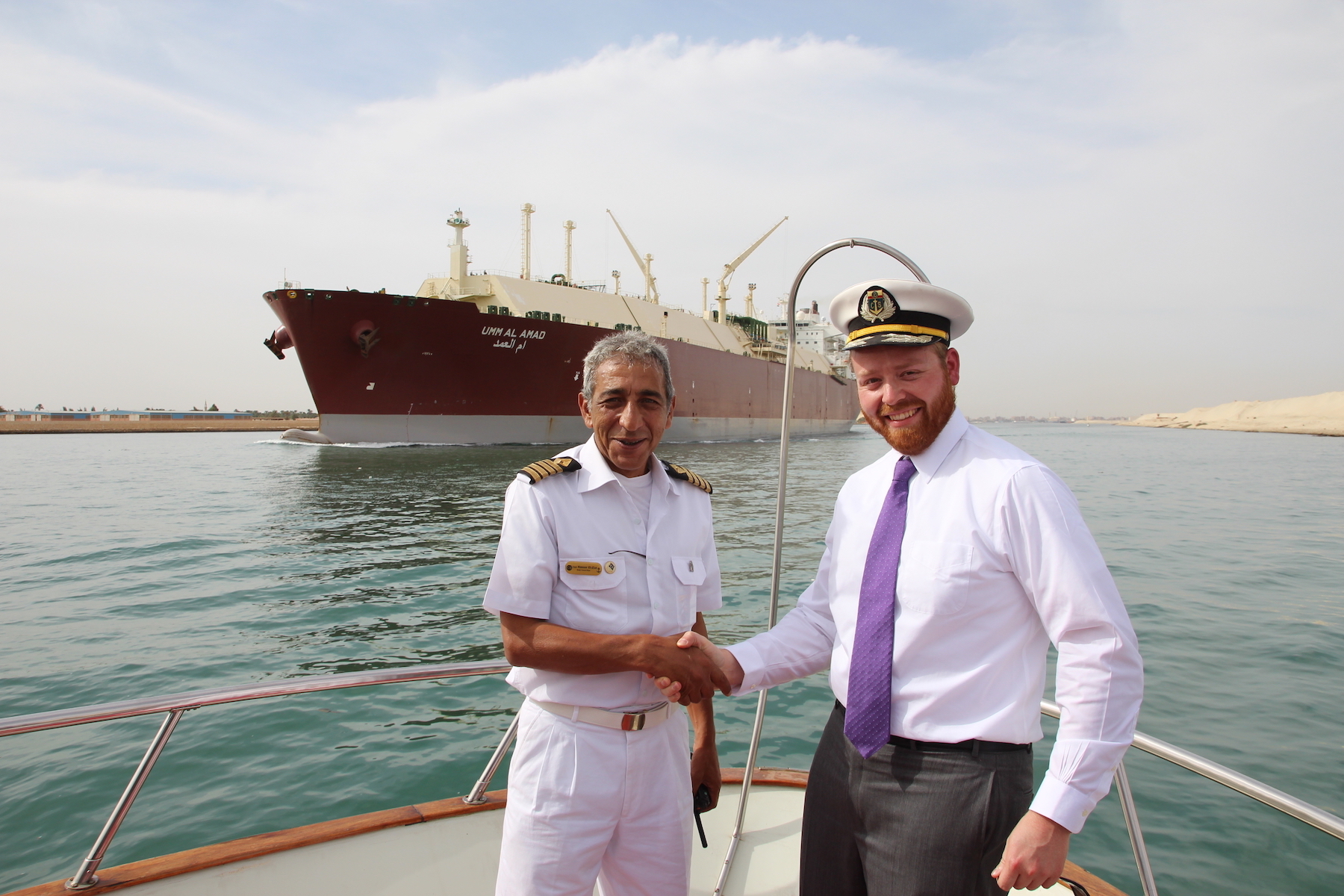 After learning about the history of the Suez Canal and the New Suez Canal, we got back on the bus and headed to the port. Awaiting us at the dock was quite a treat: the presidential yacht of the president of Egypt, commissioned by President Anwar Sadat in the 1970s.

The New Suez Canal is indeed a separate waterway from the original Suez Canal. They run parallel to each other, allowing for simultaneous 2-way traffic between east and west. Here is a video we saw at the Suez Canal Authority headquarters which best explains the details of the project and how it was accomplished:

<iframe class="embed-responsive-item" src="https://www.youtube.com/embed/9K98knUJ3HE" %} Seeing the massive embankments of sand and the beautiful blue water of the Suez Canal with my own eyes was a really special experience. The whole thing made even sweeter because of the cool vessel, and its history, we took our voyage on. The captain of the yacht was very kind. He took photos with everyone and even let us wear his hat. He was most kind and accommodating, a hospitable nature that I found to be true among all Egyptians I met throughout the country. Even I got to be the captain for some minutes! Though a looming first-mate certainly wasn't going to go too far away. **What do you think:** can I add *Suez Canal boat captain* to my resume? 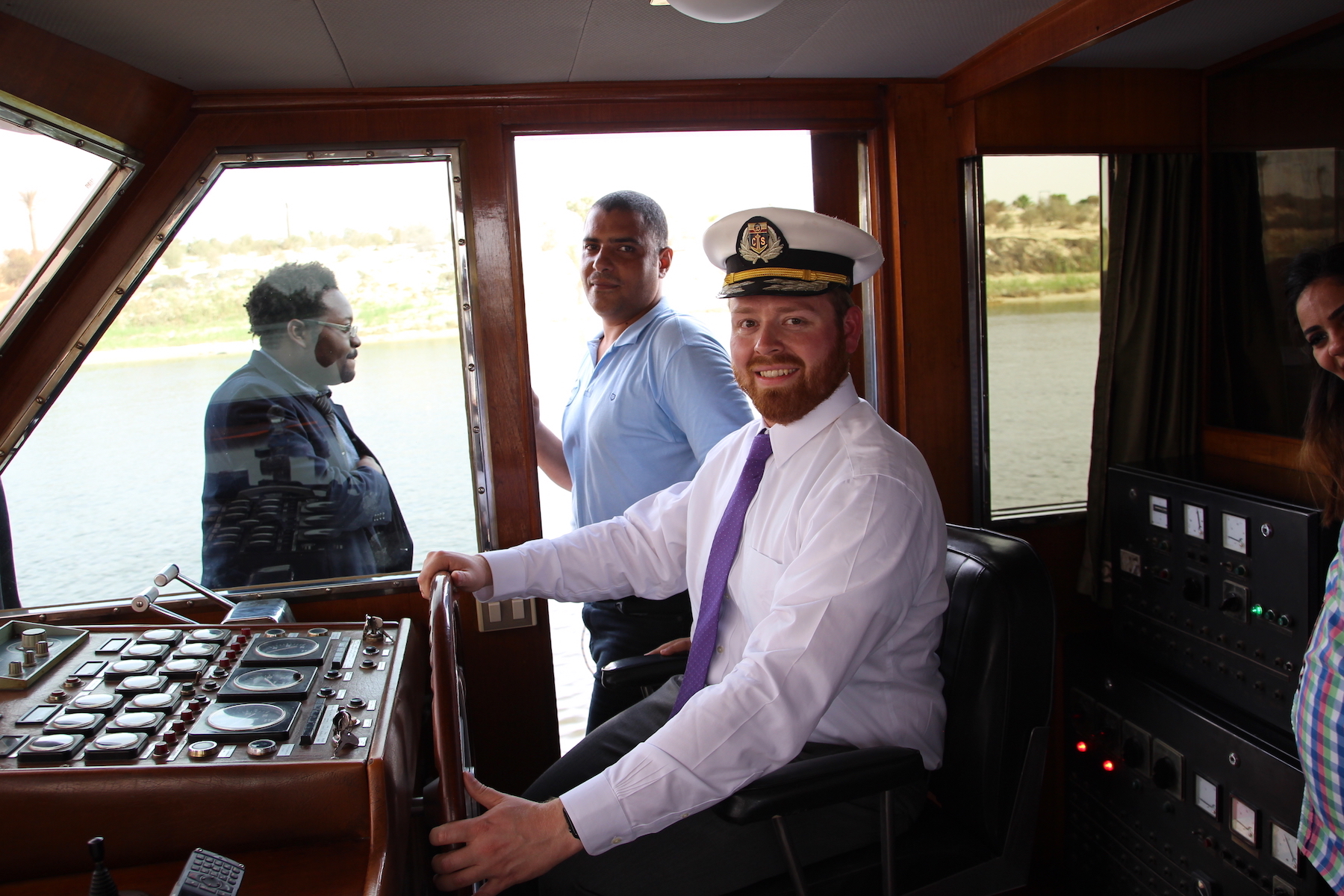 ## Safe Egypt and its Secure Canal Egypt is very concerned with its international image. What country isn't? Given the recent unrest in the country and the wider instability of the region, Egypt takes safety very seriously. From a western perspective, it sometimes felt a bit too much, but in reflection, no, I think it was just right. Security doesn't do anything unless people believe in it. Evil-doers need to believe that security forces are at the ready. Tourists need to feel safe. Investors need to have faith in longterm stability. So the occasional show of force and a little security-theater is well-warranted. I never felt unsafe in Egypt and I certainly believe that The Suez Canal is well-protected. 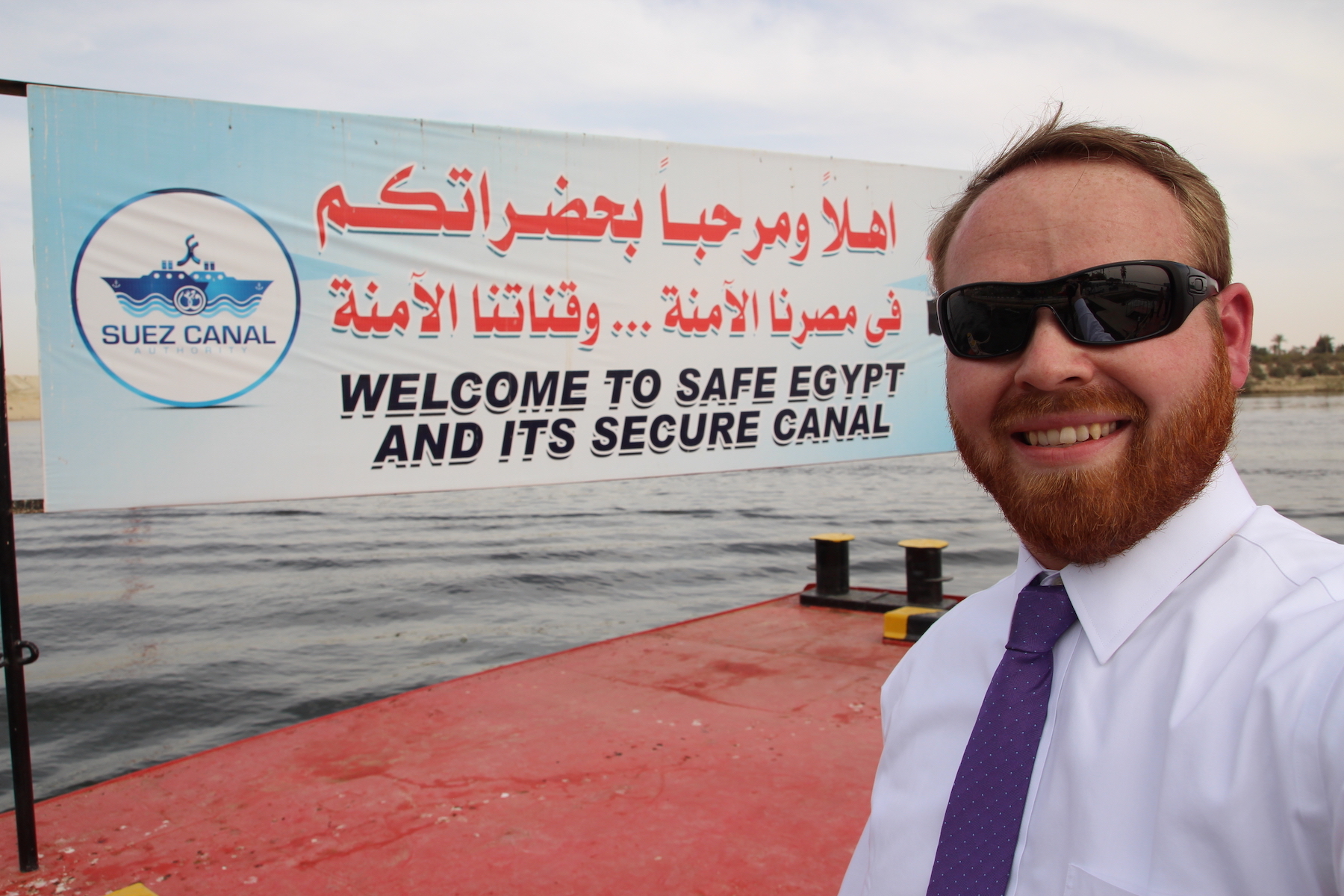 ## Final thoughts What a cool day and interesting experience. I am very thankful to Shafik Gabr and the Shafik [Gabr Foundation](https://eastwestdialogue.org/) for affording me the opportunity to have this marvelous memory. Have you been to the Suez Canal? **I'd love to hear about your experiences getting there in a comment below.** As always, travel safe and **أتمنى لك رحلة سعيدة!** (Bon voyage!) 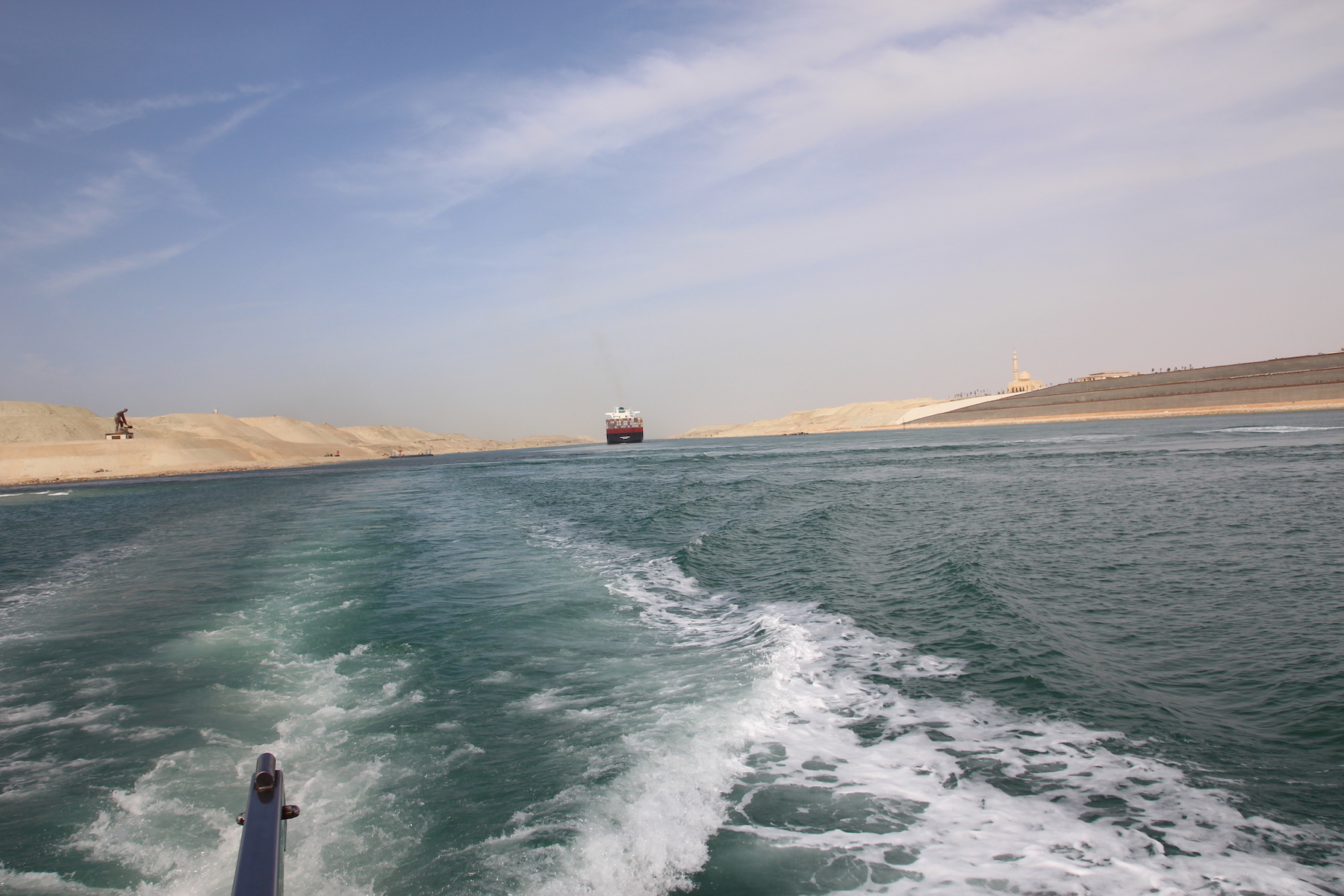