On a recent visit to Rome I was surprised to learn that these three commonly known Roman facts are not true.

Rome has been my #1 must-see European destination since I moved to Germany nearly four years ago and yet I only recently made my first trip to the ancient metropolis. It was Valentine’s weekend and the weather was picture-perfect for making memories in the city.

As is now my custom when visiting new cities, I started the first morning with a free walking tour to get my bearings and to gain some quick local insights.

The tour started at the Spanish Steps and ended at Castel Sant’Angelo with a Vatican View. Along the way, we stopped off at the Column of Marcus Aurelius, the Temple of Hadrian, the Pantheon and Piazza Navona.

Our guide, Laura, did a fantastic job transferring the knowledge she has gained about Rome in her 14 years of living in the city. We learned a lot of interesting things, including being told the truth about common lies about Rome.

Of course, it is hard to know who is telling you the lie about Rome when your mom, hotel concierge, and tour guide are saying different things. So when I got back home I did a little research to uncover the truth and found some interesting surprises. 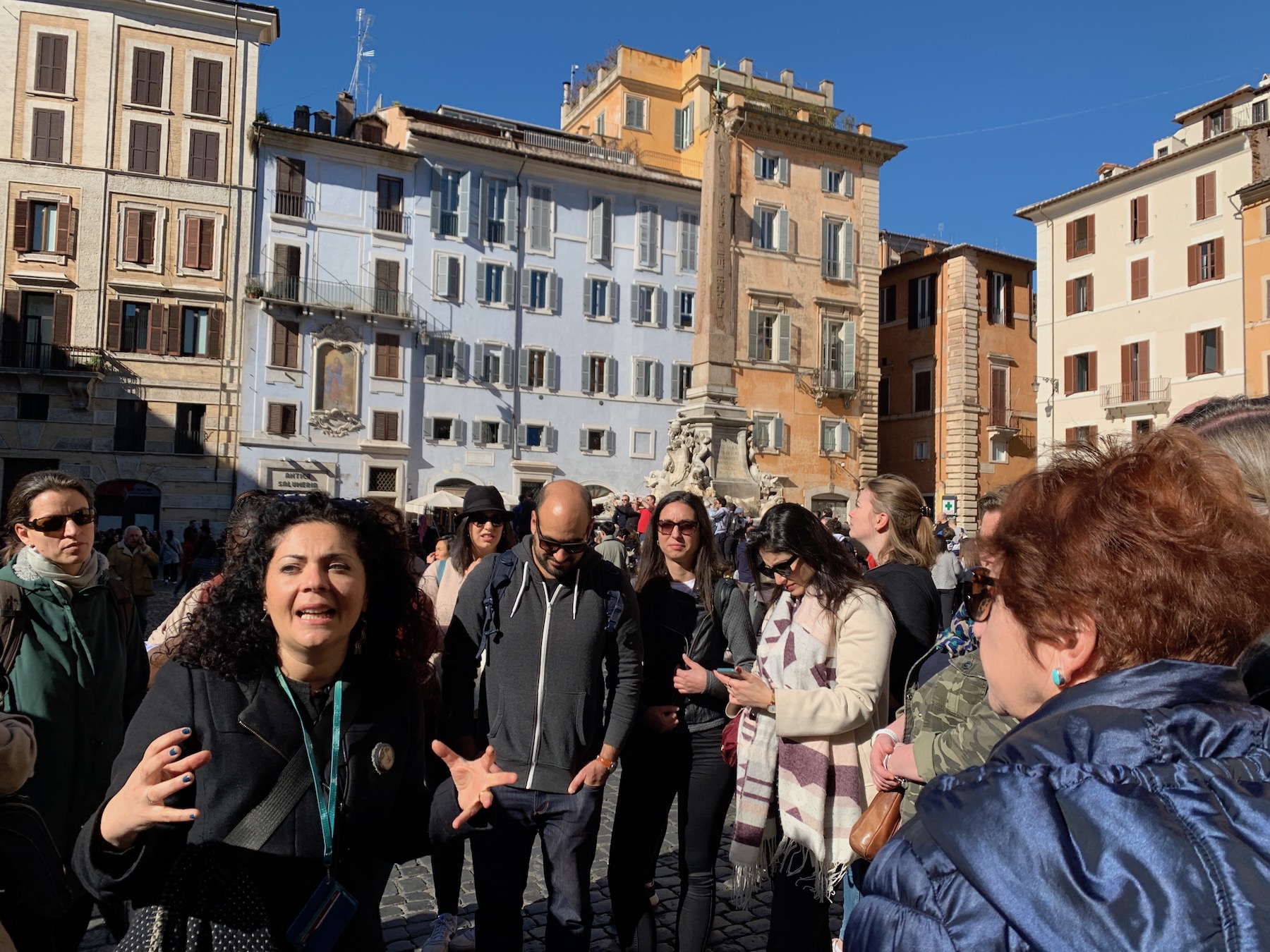 It doesn’t rain in the Pantheon 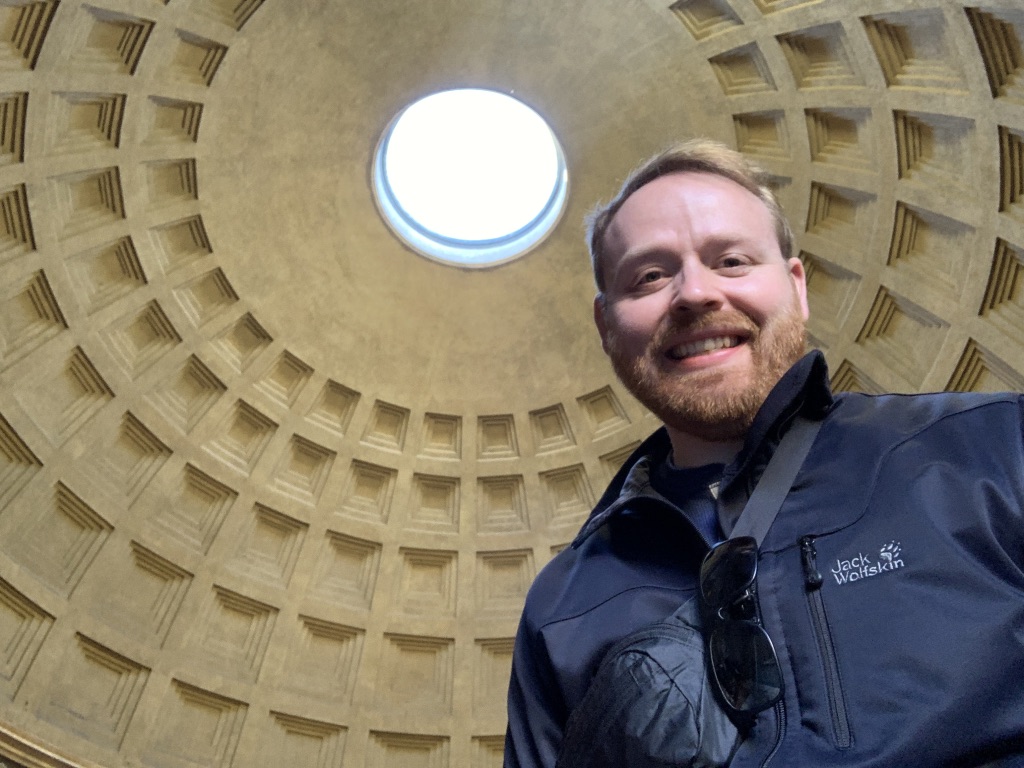 The Pantheon is an incredible structure with 2000 years of history. The Pantheon is the largest non-reinforced dome in the world, it was the first-ever temple to be open to the public, and it is the oldest building in the world still in regular use for its intended purpose (as opposed to the Pyramids which are much older but are no longer a tomb and are just used for tourism).

One of the most striking attributes of the Pantheon is the giant hole in the center of its dome. The 9-meter diameter hole is called the Oculus and is the only source of light inside the Pantheon.

It is widely believed that the Oculus is built in such a way, or that is is so high off the ground, that when it rains, the raindrops evaporate before they hit the ground and therefore it never gets wet inside the Pantheon. This is a lie. It is such an established lie, that I first heard it from my mother, who was told this lie when she visited Rome in the 1960s.

The truth is that when it rains, the floor of the Pantheon can and does indeed get wet. This is not a fluke. The ancient architects planned for this. The truth is that the Pantheon’s entire floor is slightly convex so that water flows to the center where it will find one of several drainage holes in the floor. These holes are pictured below. 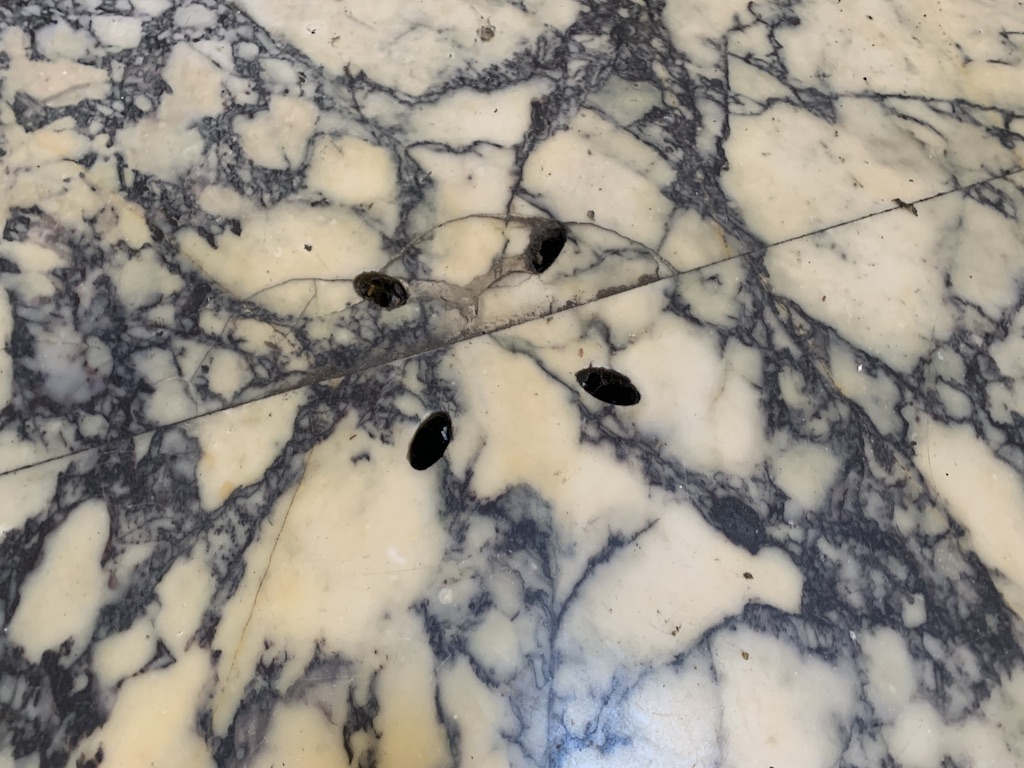 During the 17th century Baroque period there were two architects and sculptors of great renowned. Their names are Gianlorenzo Bernini and Francesco Borromini. They were the pop stars of their day and their fingerprints are all over Rome to this day. When you walk through almost any plaza in Rome you will find yourself surrounded by their creations. The two men, however, had a bitter rivalry, which is said to be on display in their public works.

Gianlorenzo Bernini was immensely popular in his time. He was commissioned for the most important projects by Rome’s most powerful and wealthy. He is best known for the sculpture of Apollo and Daphne and the Ecstacy of St Teresa. Bernini even redesigned St. Peter’s Square at The Vatican into what we see today.

Francesco Borromini was an innovative architect whose work in Rome was focused on the churches. Despite his exquisite talent, he was hindered from reaching the successes of his contemporaries due to his difficult nature.

The rivalry between these two men was the stuff of legend and popular appeal during their time. The 17th-century equivalents to modern-day tabloids spread the gossip and the people ate it up.

Piazza Navona, in the heart of Rome, became the epicenter for the rivalry between these two men. Bernini created the magnificent Fountain of the Four Rivers in the center of this plaza. The fountain represented the four great rivers on the four continents where the Church had gained influence until that time: the Nile in Africa, the Danube in Europe, the Ganges in Asia, and the Río de la Plata representing the Americas. In the center was an ancient Egyptian obelisk rising toward the heavens.

Pictured below you can see that the figure representing the Nile River is shielding his eyes. The legend is that Bernini set this figure in stone to be shielded from the horrible sight of the church directly in front of it (Sant’Agnese in Agone) which was designed by Borromini. This is a lie.

A great story, and one with mass appeal, the story was among the first things I was told by my hotel concierge the night before when I checked in. Given that the hotel is only a few minute’s walk from the plaza, I thought it would be a credible one.

The truth is that the fountain was completed two years before the church began construction. The Nile figure’s gesture only signifies that at that time, the Nile’s source was not yet known. 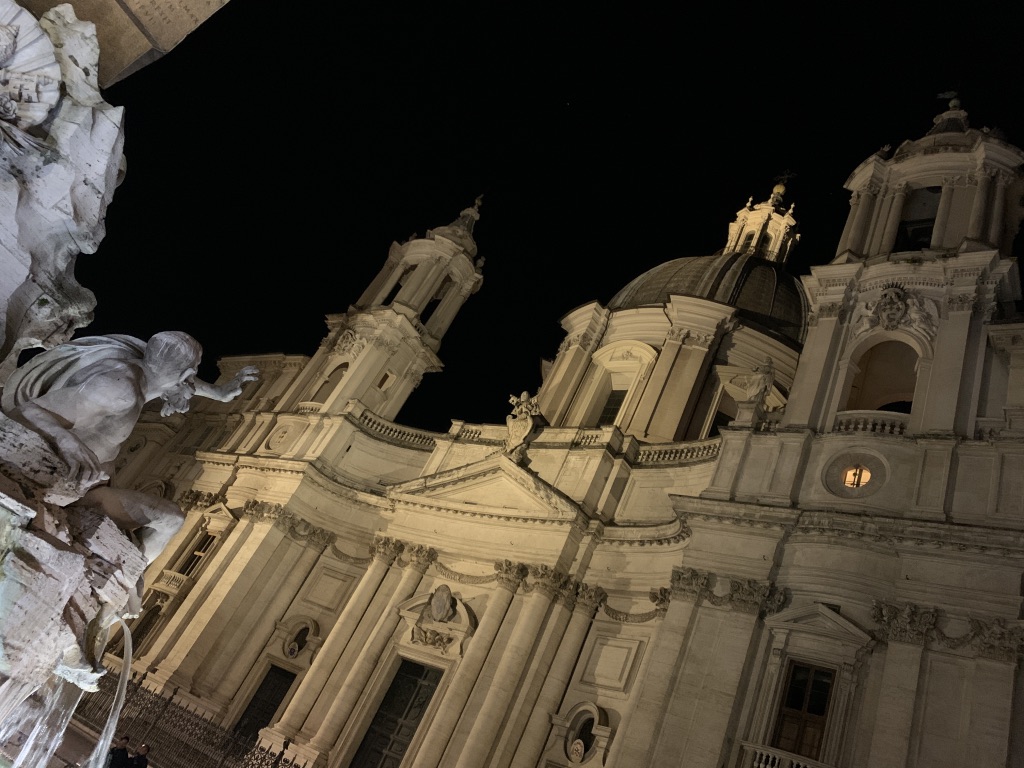 All roads lead to Rome

One of the most popular sayings about Rome is that “all roads lead to Rome.” Well, I live on a dead-end street and it doesn’t lead anywhere, so that is a pretty easy statement to discredit.

Of course, it was probably never meant to be taken so literally that every single road leads to Rome. Without looking, I can say with certainty that 100% of the roads in Australia do not lead to Rome. Therefore, it is a lie to say that all roads lead to Rome.

As for historic European roads, from the time when the Roman Empire was at its height, it is a more plausible argument to make. After doing some research on the topic, I found something really interesting that I thought was well-worth sharing.

Check out this research that the moovellab did to visualize all of the routes to Rome. The roads to Rome are pictured below, but if you visit their site they also have visualizations of all roads leading to each European and American capital, as well as to every town called “Rome” in the USA. I bet r/dataisbeautiful loved this.

So the truth is that not all roads lead to Rome, but at least in Europe, you can start on any road and navigate your way to Rome. 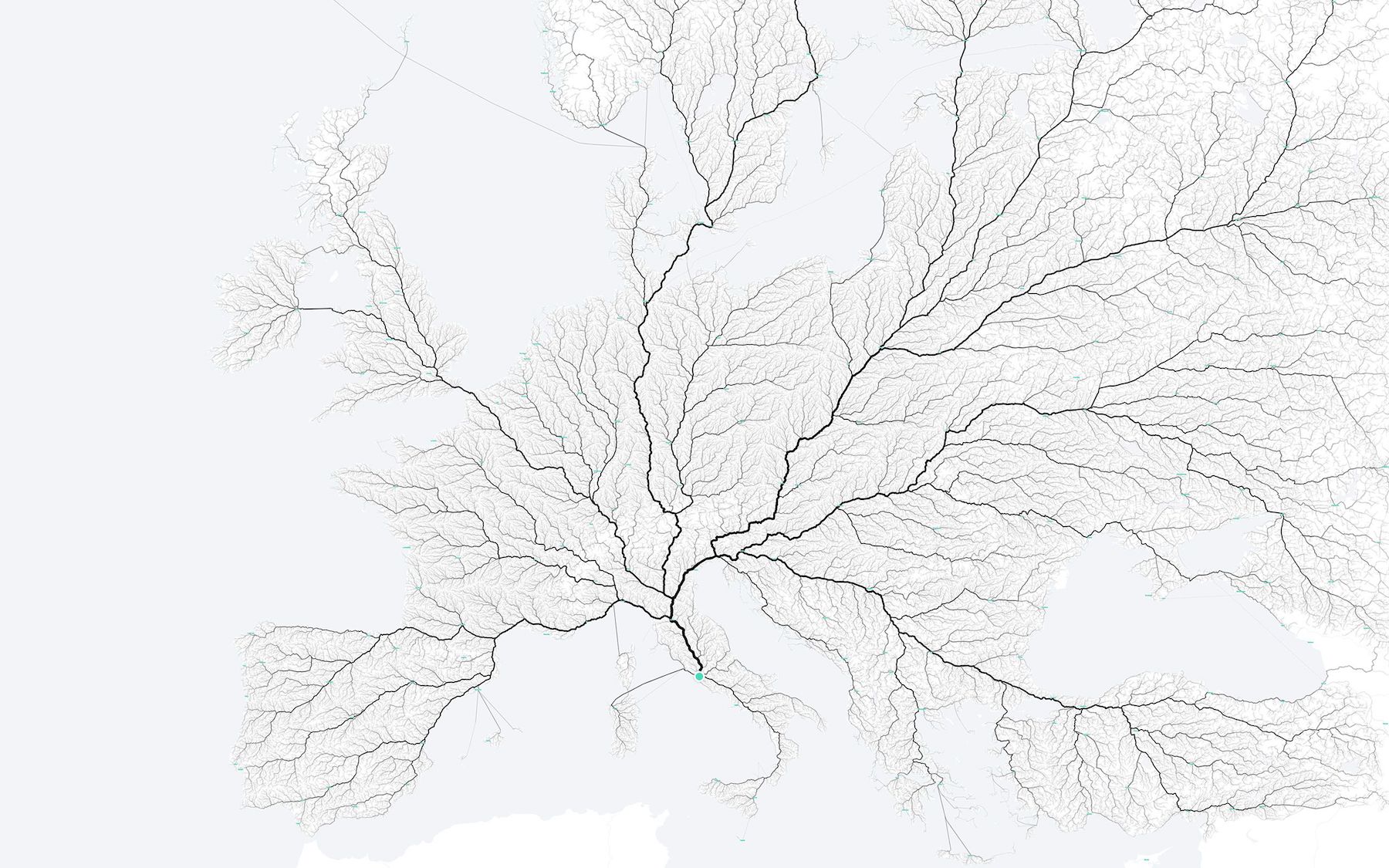 What truths have been shaken from you?

Have your beliefs ever been tested? Has something you knew to be true at your core turned out to be indisputably wrong? Please share your story in a comment below. And if you have any other insights about Rome, please share that as well!