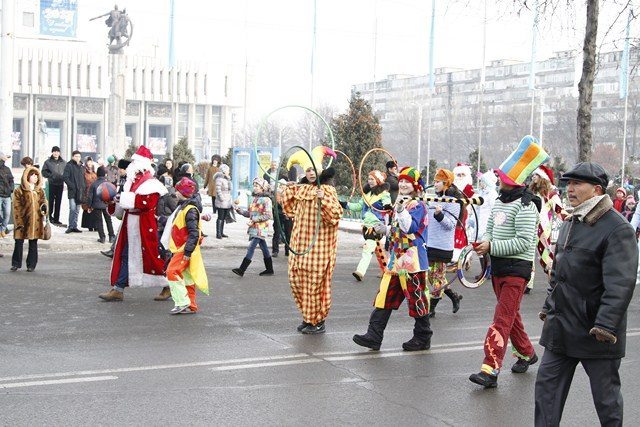 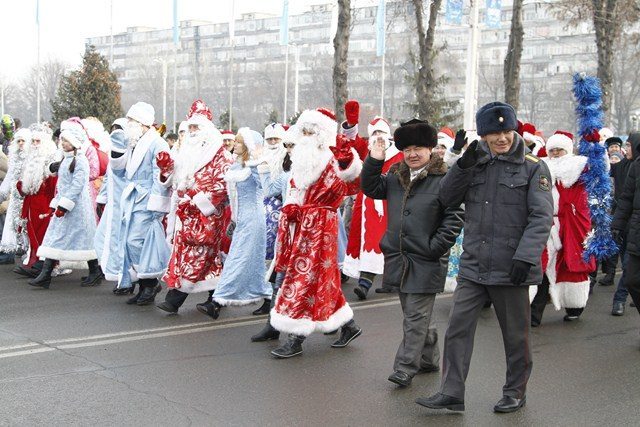 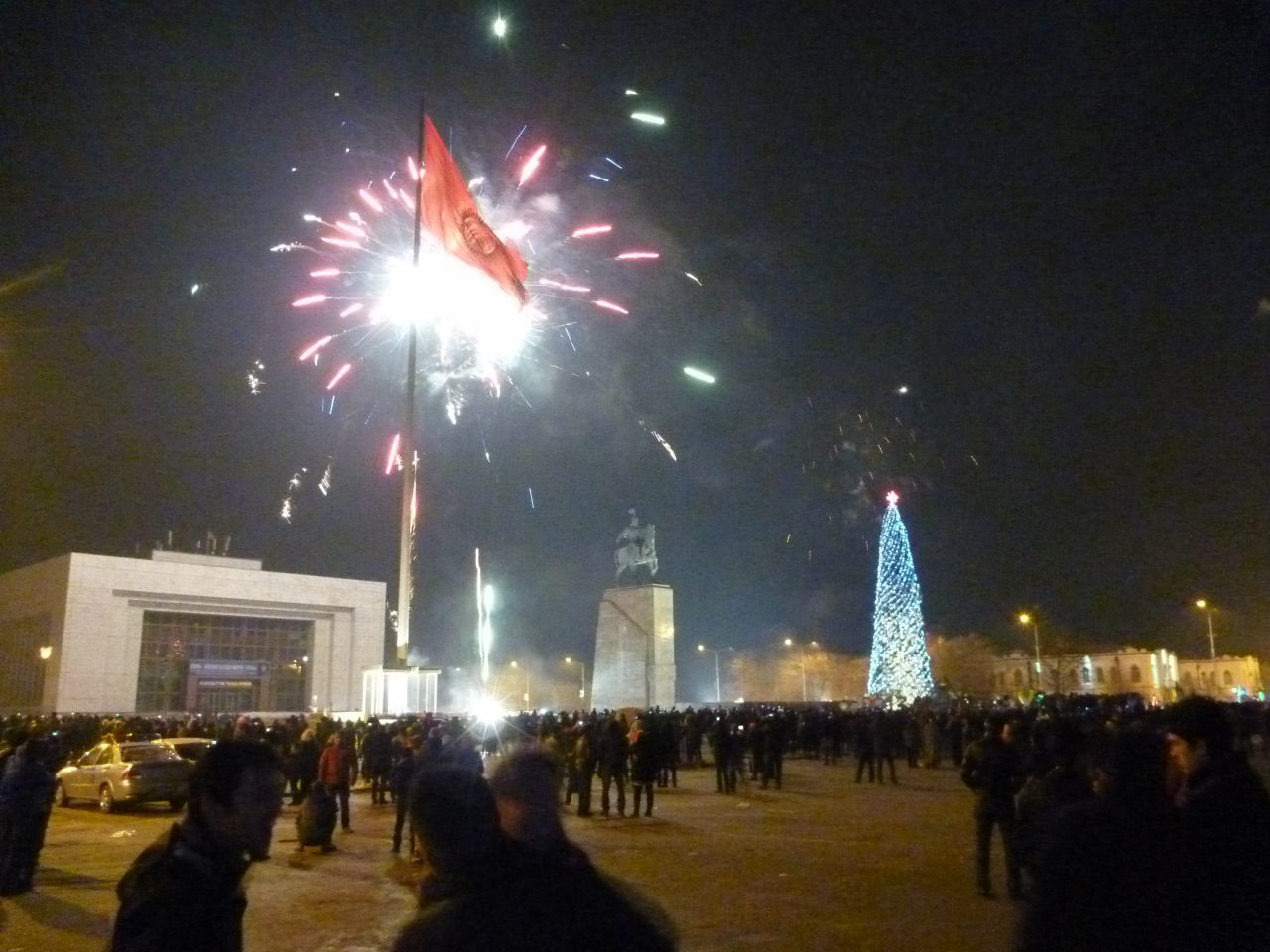 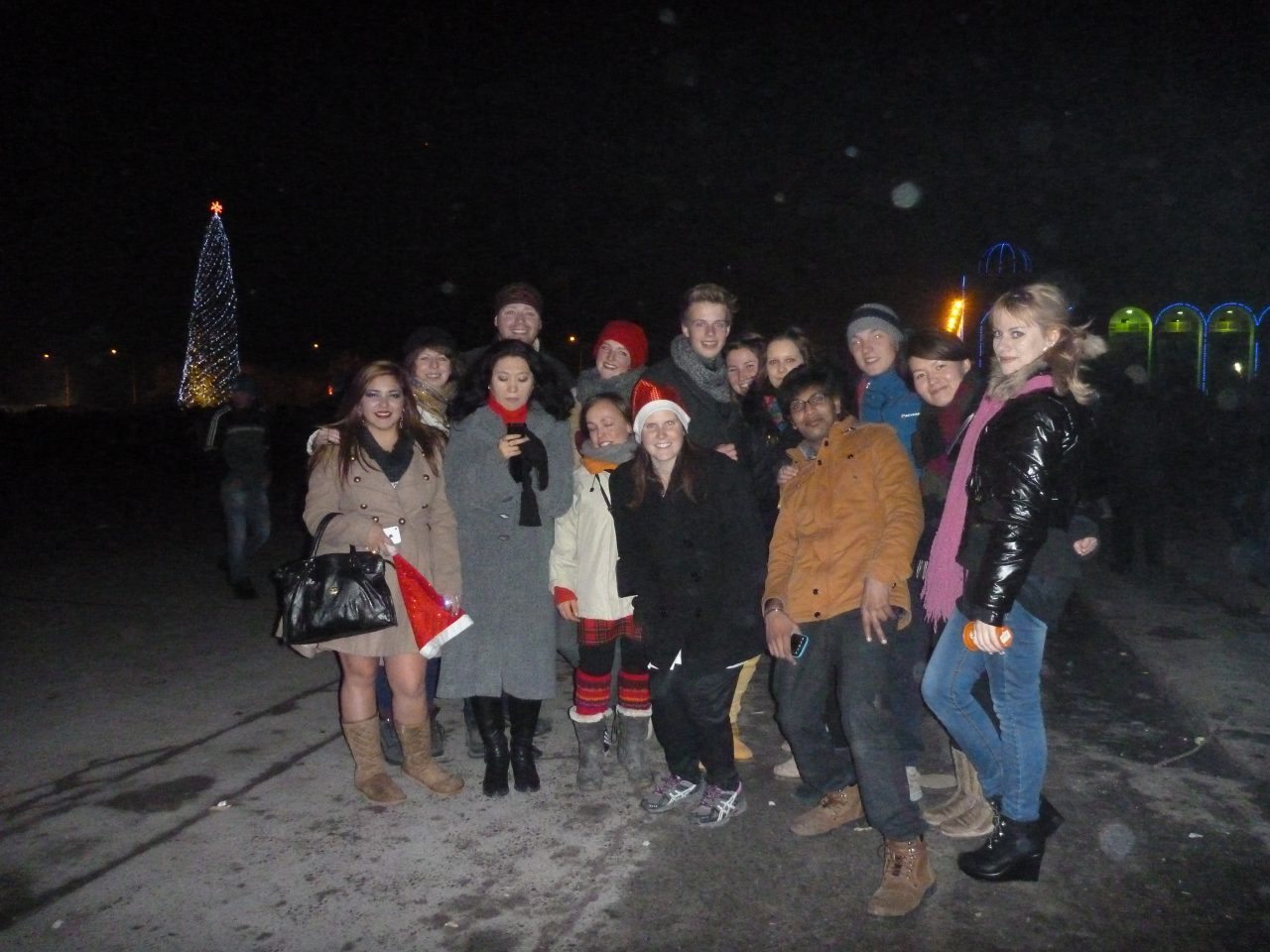 Bringing in 2013 in Kyrgyzstan was quite a spectacular series of events! Unlike in America, New Years Eve is a formal family affair. Imagine combining Thanksgiving, Christmas and New Year all together: Santa Clause (Father Frost) and his grand daughter deliver presents to children on New Years Eve, every house has a New Years Tree decorated almost exactly as westerners would expect to find a Christmas tree and at midnight there are fireworks and champaign to bring it all to a close. All of this is celebrated with family; friends rarely get into the mix.

Last year I was lucky enough to be invited to a friend’s home in Talas where we indulged in an endless table of food but an early night to bed. The village was a bit lacking in activity. This year I was unsuccessful in getting an invitation in Bishkek. I think most of my friends thought they were doing me a favor by NOT inviting me to sit with their families all night. Most of my friends would rather be out with their friends but are obliged to stay at home. So I did what I know how to do best: I threw my own party! But more on that in a moment…

The day started off like a usual day (except no Russian lesson and no work) but then around lunch time I heard the sound of a marching band (unheard of around here) passing my window playing Jingle Bells! I look outside and see a parade of hundreds of Santas, clowns and city officials. Every year the mass of characters parades from the main square to city hall where the mayor dishes out presents to the parade participants. Then the parade turns around and returns to the main square where children (mostly orphans and top students) await and are delivered the presents. Very cool.

The evening affair was a little crazy. Afraid of being alone or having a lame party (even worse!) I more or less made a blanket open invitation to the entire city to come to my house for a New Years Eve party. I made a lot of new friends this night! My apartment is very small: only a bedroom and kitchen, yet I had around 50 guests who represented 15 countries and even a DJ came with all of his equipment and made my kitchen a real club. The neighbors were kind enough to not complain until 5am. It was a great success and lots of fun.

At midnight the fireworks abounded. I live only 2 blocks from the main square so going there to see the fireworks was easy. It was not quite the display we would expect in America but it was still nice. One major difference was that alongside the city-sponsored fireworks were many personal fireworks being set off. We met more interesting people at the square and brought them back to my house to keep the party going. The night was epic.

Now 2013 is here and it’s time to think about the future. I have had some amazing years recently but what I have planned for 2013 might just top them all. On the list is a over-land journey from Kyrgyzstan to Portugal this summer, possibly going to graduate school in Europe next fall and setting the stage to make a long-awaited return to Brazil in 2014. I have no resolutions to declare as I sibscribe to the phillosophy of “if it’s not broken, don’t fix it!” And things so far are going just fine.

Happy New Years to you and yours and may 2013 fulfill all of your greatest wishes!